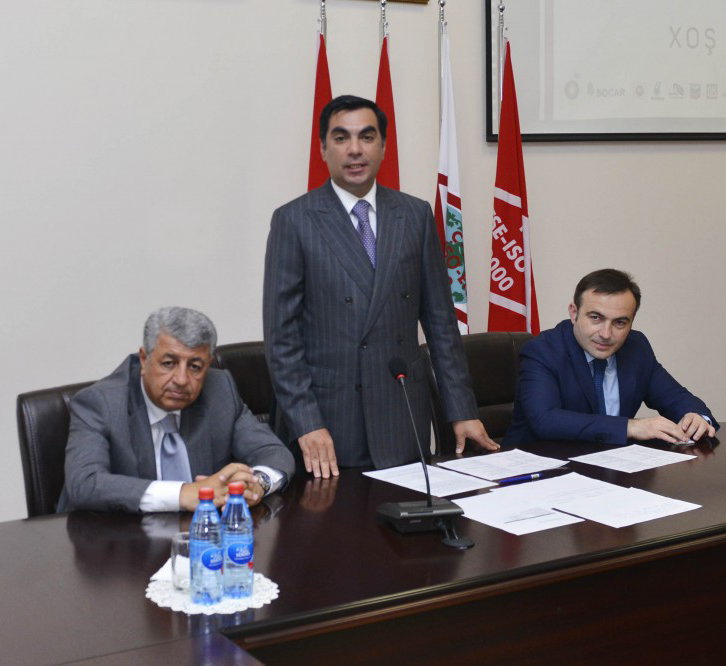 Baku Higher Oil Schoolhosted a meeting dedicated to next admission of trainees to School of Project Management(SPM) jointly set up by BHOS, BP in Azerbaijan and TwentyEighty Strategy Execution company. The meeting gathered representatives of BHOS, SOCAR and BP management, and SPM students.

Opening the gathering, BHOS Rector Elmar Gasimov said that first SPM trainees already passed course exams and received certificates of successful completion of the first training module. Speaking about the Higher School latest developments and achievements, he informed that BHOS graduate Riyad Muradov, who received a Bachelor degree in Petroleum Engineering, obtained a scholarship from Stanford University in the USA, one of the most prestigious universities in the world, and will pursue a Master’s degree there. The Rector also emphasized that BHOS management regularly arranges the students’ internship at SOCAR, BP and other large companies, which, in their turn, provide job opportunities for the bright and most talented students.

SOCAR Vice president for HR, IT and regulations Khalik Mammadov told about significance of SPM and similar initiatives for training of local specialists according to the best international standards. He expressed his congratulations to BHOS Rector Elmar Gasimov on the accomplishment of the first module’s training course and wished all SPM students every success in the future.

BP Vice president for communications, external affairs and strategy for Azerbaijan, Georgia and Turkey region Bakhtiyar Aslanbayli highly praised progress in the SPM project implementation. He said that it is particularly important to develop similar initiatives today, as the number of the projects implemented in various spheres considerably increased.

On behalf of SPM trainees, Deputy Minister of Labor and Social Protection of Population of Azerbaijan Metin Kerimli congratulated the Rector Elmar Gasimov and SPM students and said that education is important for every person at every age. In his words, opening of the School of Project Management at BHOS is a new milestone in successful development of the Higher School.

Speaking at the meeting, instructor from TwentyEighty Strategy Execution John Pelham said that he was very pleased to come to Baku and participate in the SPM project. John Pelham was specifically invited by the TwentyEighty Strategy Execution company to conduct training courses at SPM, as he has more than 20 years of project management experience in various fields including retail, banking, IT, and construction.

The SPM program was founded in 2011 by BP and its partners. The program is technically supported by TwentyEighty Strategy Execution company in cooperation with George Washington University (USA). The academic program comprises seven modules of training. Upon successful completion of the study, the trainees will be awarded master certificates from the George Washington University. Up to now, three stages of the project were implemented and more than 300 specialists from local and international organizations of public and private sectors were trained. The fourth stage has commenced at the Baku Higher Oil School. Upon its completion, BHOS shall carry out the educational program within the SPM project single-handedly.