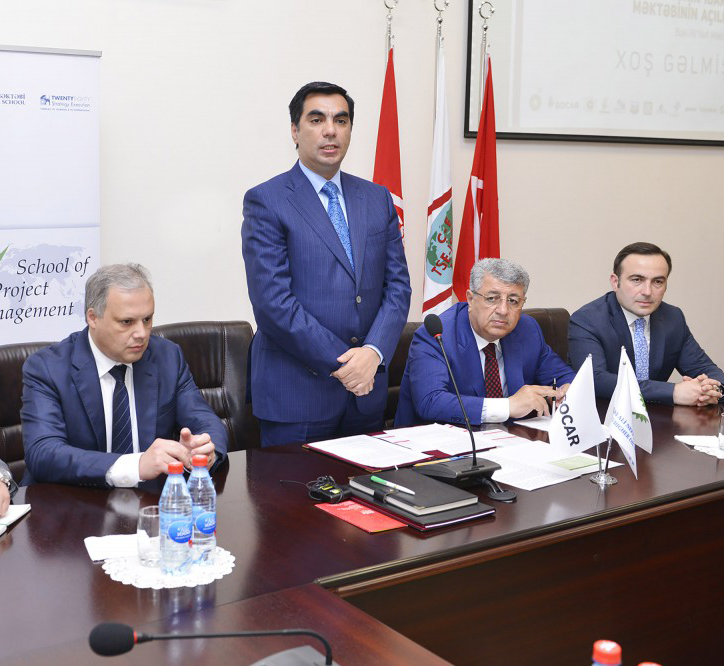 Opening the ceremony, BHOS Rector Elmar Gasimov said that establishment of such an educational center, which aims at fulfilling national specialists’ potential and developing their managerial skills, is an important event for Azerbaijan. The Rector also emphasized a key role to be played by the SPM in training local managers, whose qualification would meet international requirements.

As SOCAR Vice president for HR, IT and regulations Khalik Mammadov stated, the School of Project Management was set up with the purpose of developing national scientific and educational potential of the country. Establishment of this school made it possible to initiate training of top and middle level managers capable to carry out projects for various sectors and industries, he said.

Speaking at the ceremony, Vice President for Geology and Geophysics Bahram Huseynov and Vice President for Field Development Yashar Latifov expressed their congratulations to the SPM trainees and all project participants on the start of the program and wished the students every success during their education at the School of Project Management. They emphasized that study at the SPM would be conducive to the graduates’ further successful career development.

In the words of BP communications, external affairs, strategy and Azerbaijan, Georgia and Turkey region Vice president Bakhtiyar Aslanbayli, the School of Project Management is the most successful initiative on training local specialists and developing their skills and knowledge in project management among similar initiatives sponsored by BP in cooperation with partner companies. In his words, the SPM has already become one of national educational institutions, which carries out activities in compliance with international standards.

Representative of the TwentyEighty Strategy Execution company, Master of Business Administration in Economics and Information Technology, trainer Didier Estibals highly praised the efforts taken by BHOS at the School of Project Management to create all necessary conditions to hold various training courses including aspects of project management, planning and budget control, risk management, quality and leadership in management. He also reported that at the initial stage, educational subjects at the SPM would be taught in English language, but in two-three years, all courses would be held by local trainers in Azerbaijani language.

The SPM program was founded in 2011 by BP and its partners in order to meet local requirements in terms of managing of projects in line with international standards. The program, technically supported by TwentyEighty Strategy Execution company in cooperation with George Washington University (USA). The academic program comprises seven modules for training of managers. Upon successful completion of the study, the trainees will be awarded master certificate from the George Washington University. Up to now, three stages of the project have been implemented and more than 300 specialists from local and international companies of public and private sectors have been trained. The fourth stage has commenced with support from the Higher Oil School. After its completion, BHOS will carry out the educational program within the project single-handedly.